Our DDoS filtering protects from floods over 3500 Gbps!

Distributed Denial of Service (DDoS) attacks work by flooding a targeted server or network with large sustained volumes of traffic. Distribution of the attacks usually involve many compromised computers on diverse networks around the planet. This prevents any easy end-customer mitigation, achieved by blocking certain networks, countries, etc.

To businesses, the impact of DDoS attacks is loss of sales and dissatisfied customers. To media and social groups, DDoS attacks effectively silence your voice. To governments, DDoS attacks can disrupt communication to public and employees. To gamers, DDoS attacks mean your competition won.

BuyVM offers a very affordable solution to protect your server from DDoS attacks. For just $3.00 per month (per IP) you can receive over 700,000,000 packets-per-second or 3500gbps+/sec of DDoS protection. The amount of protection is not dedicated to you but is a pooled resource all protected customers share in each location.

What types of floods do we protect against?

Some protection methods may require a support ticket to be enabled.

Who knew a guy punching a tree could cause so much damage.

The Minecraft community stayed online during the entire attack and did so without lag, and without any nullroutes. 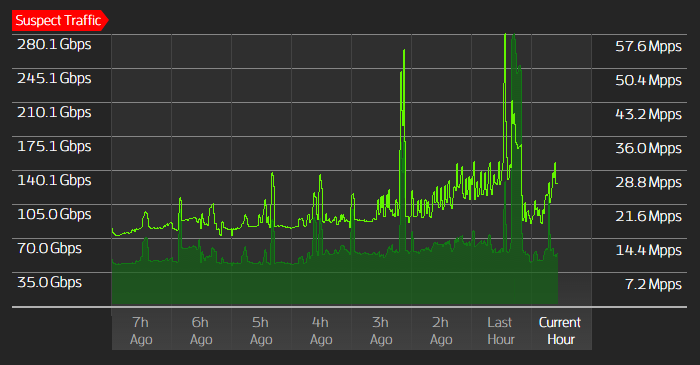 Can your DDoS Protection save you from this?

What to expect with other DDoS protection solutions.

Is there a Service Level Agreement?

Yes, we have a 99.9% uptime guarantee. It does not cover downtime due to application layer floods. Please see our TOS for more information.

How much DDoS protection is provided?

We provide over 700 million packets-per-second of filtering or 3500gbps+/sec for volumetric floods. This amount of protection is not dedicated to you but is a pooled resource shared in each location by all DDoS protected customers.

How long does it take to activate my DDoS protected IP address?

DDoS protected IPs are automatically issued upon placement of an order. Activation of your account normally takes anywhere from 5 minutes to a few hours.

Where can I find my protected IP address?

Once your protected IP has been provisioned you can find your IP address listed in our Stallion control panel under the networking tab.

How much does BuyVM's DDoS protection cost?

Protected IP addresses cost $3.00/month per IP address and are available in all locations we operate. You will also need a VPS which to bind the IP address. You must have an active VPS with us to order our DDoS filtering.

Where can I order a DDoS protected IP address?

While in the checkout process, or on the product upgrade page, simply enter how many protected IP addresses you want under our Path.net DDoS Protection.
Have questions? We'll help answer all of them. CONTACT SUPPORT
CHAT WITH SALES